The Story of Thelma the Whale

Thelma is very lonely and has no friends to play with her. She ends up crashing into the beach, which interrupts the soccer game played by Thomas, Sharon, Lewis, and Jamie.

Lucy noticed a green leaf on the ground. The green leaf came from the tree, where the monkeys won't share their enrichment with a seagull named "Gunnar". Lucy is pleased with Gunnar, but not the monkeys are not. Lucy began inviting them to listen to the story.

It is a sunny day at Mossy Bay. The animals have fun around the island. Hercule Mustache enjoyed his picture made from seashells. Thomas, Sharon, and Lewis began playing football near the island. Jamie decided to jump in the sea, but bumped into Thelma by accident. Jamie asked Thelma by floating by herself. While everyone has fun in the island, Thelma felt very lonely.

Jamie decided to invite her to play on the beach. He began guiding Thelma if there are any whales on this island. This island is home to Thomas, Sharon, Lewis, and even Hercule. Thomas, Sharon, and Lewis played football until Sharon got hit by the football. Thomas began calling Sharon that someone is far from a distance. It is Jamie and Thelma arriving on the island. Jamie is warned that whales can't be brought on the island. It is also stated that this island is only for the puffins and other animals.

Thelma is finally welcomed to visit the island. Thomas, Sharon, Lewis, and Jamie played football with Thelma. Unfortunately, the football is swallowed by the whale. The game is interrupted and must be restarted with a new ball. A new ball is made so the game can be continued. Suddenly, the tide began pushing Thelma on the beach, interrupting the game. The picture is completely ruined. The other puffins are upset with Thelma on the land.

Thelma attempted to go back home after crashing into the beach. The problem is Thelma is unable to get off the beach. It is believed the only way for Thelma to be back on water is to wait for the great waves. Sharon accused her that it is she who did the cause. It is actually the waves that are the main cause. Thelma actually wanted to join in the game of football.

Thelma ended up crying after being accused by Sharon. Thelma stated herself for being a clumsy whale. Thelma is not always clumsy, though. The water from her spiracle actually surprised Jamie. Meanwhile, the puffins have an argument with Hercule about Thelma on the island. However, Hercule began saying this reaction to Thelma cannot always be unkind, though.

Thomas, Sharon, and Lewis must apologise to Thelma for being rude to her. They and Jamie ended up playing on Thelma with her spiracle. They return to Hercule to join in. Everyone played on Thelma until late afternoon. The tide is appearing during the afternoon. Sharon won't let Thelma leave the beach, though. Thelma must be back on the sea when the tides are appearing. Thelma must be pushed off the beach in order to return him. Gunnar commanded the puffins to do this immediately. Hercule listened to Gunnar commanding them to push. Sharon ended up joining in with everyone by pushing her back to the sea. Thelma is finally pushed back to the ocean. Thelma had been the best guest on the island who played football for many years.

We learn that we should always share our stuff with other guests when we meet them. The monkeys allowed Gunnar to share their tree. They also thought Gunnar should tell a story. Gunnar must be returning to the seashore during nighttime and Lucy must return to bed too. 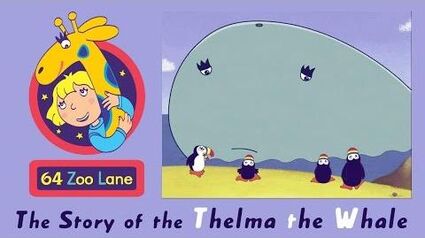