The Story of Toby the Turtle

Toby gets frightened and is unable to get out of his shell, due to being very nervous of thunderstorm.

Lucy gets scared of a spider at the zoo. The spider wasn't doing any harm to Lucy.

One night, all the animals ran for shelter during a storm. Toby gets scared very easily during the storm.

The next day, the animals wake up after the storm. Doris and Kevin have noticed why Toby is hiding in his shell forever. That is, because of the storm last night (since Kevin says that the tortoises can't leave their shells).

Reginald tries to wake him up with his roar, but nothing happens. The monkeys soon start playing with his shell, but Nelson says that the animal friends don't throw each other. Toby is later taken to Doctor Gordon. He says that "he's as fit as a fiddle", leaving the customers confused.

The spider does not bite anyone. Instead, he is very gentle towards Lucy and the animals. 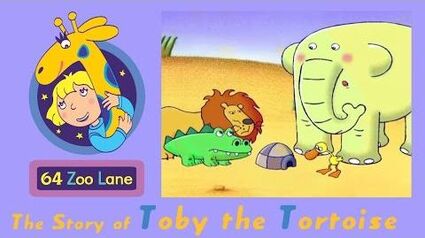