The Story of Victor the Crocodile

Victor bans all the animals from the water hole, because he gets fed up with splashing. When the animals are very thirsty, Victor was angered with them. However, no one wanted to help him.

The animals felt very thirsty without water. The summer nights were very dusty and the animals are very restless. The next day, the animals found water under a rock, which made the geyser remove the water hole far away. Victor gets angered when his bathing place has turned into a dust bowl.

The next day, Victor was very upset for the water taken up. Victor tries to ask Georgina for water, but she refuses to share. Victor also asked the monkeys to share water with him, but yelled at him for being very stubborn. Audrey began making a suggestion for an apology. In practising, Victor must be very sorry for being very selfish and nasty.

After a lot of practice, the animals made a surprise for Victor: a water park. The animals had fun on the water slide. Victor began making a rumour about himself for being good. It is rumored if Victor will become even nastier after deserving a surprise.

Not every creature is scary all the time. Lucy wouldn't like to take a bath with Victor. The monkeys pretend to be a 2-headed monster, which would be scarier than a crocodile. 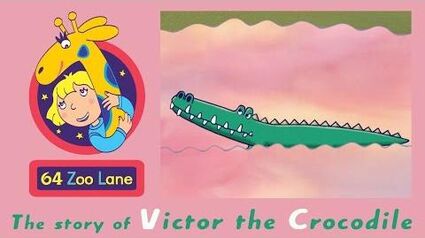