64 Zoo Lane Wiki
Register
Don't have an account?
Sign In
Advertisement
in: Episodes, Season 1 Episodes, Episode that the Snip Snip Bird told the story,
and 6 more

The Story of Zed the Zebra

Zed impresses all the animals with his Go-Faster Stripes and challenges them for a race. When he races with the animals on an attempt to win, Zed doesn't win. However, Zed doesn't feel bad after losing the race.

Lucy tries to practice for the potato sack race for tomorrow at school, but Nelson prevents her from doing so. Lucy is willing to win. Molly replies back to Lucy that we can't always win. She also says we sometimes win or lose. Behind her was a green bird saying that everyone should have fun after losing.

Zed is a very fast zebra. He is faster than Nelson the Elephant and the other animals in Africa. Zed is also notable for challenging them by racing them. The Snip Snip Bird, Herbert, Ronald, Georgina, Nathalie, and Nelson are talking about a race. Zed meets the animals in the jungle. The other animals are very happy to see Zed.Later, we see Zed going across the animals practicing for the race.

The 4th obstacle was a path of very large boulders. Ronald began bashing the boulders, and the animals are facing the last obstacle: a blue mountain. Herbert began digging through the mountain with his hooves to pass the last obstacle. Zed was in first place, but he stops at the water hole for a drink. The animals went across the finish line, winning the race. The winners are: Georgina, Herbert, Nathalie, Nelson, and Ronald. Zed was in second place and is sad because he didn't win the race. Zed didn't feel very bad, because he had fun in the race.

The Snip Snip Bird tells us that we should always have fun in the race.

Lucy has finally understood why it is okay to lose. She feels very tired. It is time for Lucy to go to bed, so she can prepare for the race. The Snip Snip Bird says "Goodnight" to Lucy. He also says, "Good luck" for Lucy to win the race tomorrow. 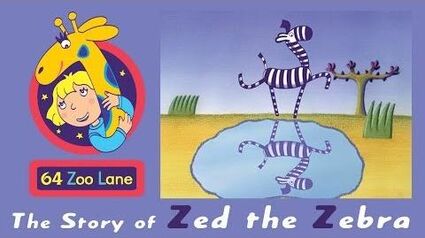