64 Zoo Lane Wiki
Register
Don't have an account?
Sign In
Advertisement
in: Episodes, Season 1 Episodes, Episodes that Molly told the story,
and 6 more

The Story of the Elephant Bird

Nelson tries to be like a bird to beat the World Distance Flying Record, but all his efforts are futile.

Lucy pretends to be a grown-up with a feather boa, a necklace, and a pair of blue slippers. All the animals would like to pretend to be someone.

At first, Nelson is always busy like an elephant does. Nelson is very tired of having this job, so his style has changed into a bird. In order to fly, Nelson must have lots of feathers and then a nest. Nelson also has to flap his ears like a bird. The birds agree to give him their feathers in order to help him fly.

Nelson tries to fly, but his attempt is a failure. Nelson tried to capture worms or sit on watermelons, but nothing happened. He is also given some banana leaves as helicopter blades for him to fly. Something was wrong after Nelson had failures in flying with disastrous results.Nelson fell in a mud puddle! Nelson feels sad sulking and sitting in his nest. Nelson has to love himself in order to get out of the habit in being the bird. The animals feel very bad for Nelson, because the abilities to fly are failure.

Nelson decides to get his old job back when there is a boulder on a burrow that belonged to a snake. The animals can't remove the boulder, so Nelson must do it for them. The snake is very happy with Nelson for freeing him. Nelson is very happy to have his old job back. He is given a ribbon for getting his job in which an elephant can only do. Nelson announces his retirement from a bird job!

Lucy is very happy with Nelson. She likes the part where Nelson is pretending to fly. Nelson likes the old job when Lucy is loving herself once again. 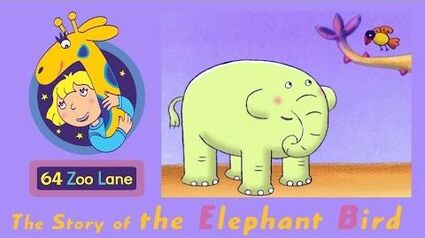