The Story of the End of the Rainy Season Clean

As the rainy season comes to an end, lots of rubbish are scattered throughout Africa. The animals, with their assistant Patsy, must clean up all the rubbish towards Africa.

Lucy has a bag of toys for the animals to see. It is explained that she has too many toys in her room.

The rainy season comes to an end, which makes the animals clean up the mess. As everyone was busy cleaning for Patsy, Herbert was the only one who won't clean up. He has a conversation with Alan about the mess in the burrow. Alan said that there will be a concert at night about the end of the rainy season.

Herbert could not find the musical rocks, due to lots of rubbish inside the burrow. He soon began to ask Doris why the rocks are missing. Doris said that too many rubbish can overlap the musical stones. He is suggested to make two piles: one for throwing away and one for keeping them. Almost all the rubbish (except for a banana peel) was removed from the burrow.

Herbert found the rocks for him to play after being tidied up. He decides to have a mud bath before the concert. Patsy is pleased with Doris cleaning up almost all the rubbish. She is asked about Herbert cleaning up a big pile of rubbish to remove. Patsy didn't know there were three stones that belong to Herbert.

Herbert was very confused about Patsy who took the wrong pile of rubbish. He is explained by Doris that all the rubbish are taken to Ronald to be crushed. Herbert arrived to the area with Ronald crushing the rubbish. He feels very bad about the rocks that were crushed by Ronald. It is revealed that his bird friend recycled them.

That night, the animals had a concert at the volcano after cleaning up all the mess. The animals remembered the concert that occurs after the rainy season for a long time.

We learn that it is not okay to keep many stuff in your room at once. Therefore, we have to either give them away or put them somewhere else. Lucy likes to keep her favourite bracelet, because it's her favourite toy. 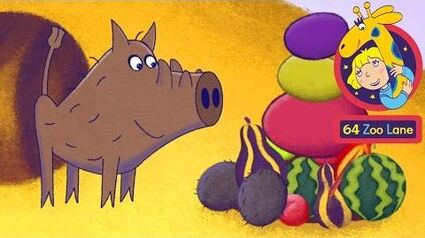