The Story of the Hyenas's Holiday

Harry goes on a vacation with the hyena family to the Waterlily Lake. The hyena pups get lost and Edna bumps into a nearby aardvark.

One morning, the hyenas are awake very early. They decide to go to the lake for a holiday. As soon as they explored some part of Africa, Edna complains about Harry walking to the same place he's been before. She and the pups will not move until Harry asks for directions. Georgina was able to help the hyenas go to the lake.

While arriving, a storm strikes upon the hyena family. Harry talks to his hyena family that the hyena family never gives up. Arriving at the lake, the hyenas stop by for a picnic. They didn't have any food and stopped for a while. Holly and Johnnie started frolicking around as Harry is going for a swim. Meanwhile, Kevin and Doris are able to save Harry from drowning.

Upon meeting Alan, Edna is guided to look at some exotic types of the ants. Holly and Johnnie frolicked around the volcano and it started to erupt. Georgina was able to save the cubs from danger. The hyenas are very happy after all the 4 are reunited. They have fun laughing at the top of the volcano during the sunset.

Lucy wouldn't like to go on a vacation with the hyenas, though. Lucy thought of a great place to visit during vacation: the zoo! 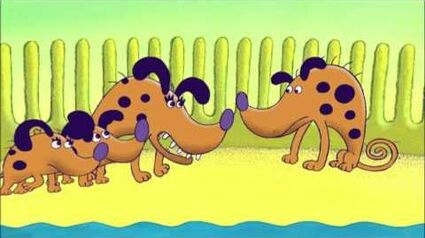