The Story of the Important Visitor

Cleopatra is visiting the African savannah and the animals prepare a special feast for her.

Lucy is disguised an inspector, pretending to be someone important. These props contain a fedora hat, 2 sunglasses and a fake mustache. Lucy decides to give a rating for a story that is told by Molly.

One morning, the animals are gathered around to listen to the news. William stated that Cleopatra is visiting the African savannah at noon. As the animals are talking about her, the fuss began to annoy Reginald. The animals were determined to pick the food suitable for Cleopatra.

That evening, the animals prepare a big banquet for Cleopatra. A red carpet (made by leaves) is rolled towards the savannah for the visitor to come. As soon as the banquet is prepared, there was no sign of Cleopatra.

A few minutes later, we see a porcupine arriving in the banquet. She represents her name as "Cleopatra" (or "Patsy"). Patsy and the animals decide to have a party while hiccuping. The animals had a great banquet for Patsy.

Lucy gave the story a 10. Molly is also praised for being a great storyteller. Nelson gave her disguise a 10 too. The monkeys begin removing her disguise in order to go back to bed. 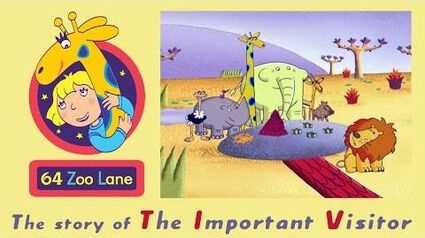