The Story of the Juicy Fruit Tree

Lucy almost drops her sandwich before it gets dirty. The animals tell her a story about the Juicy Fruit Tree.

A rare type of fruit is shown in a tree. The many animals took a look at a very edible fruit, which is considered to be very interesting; if the fruit isn't caught, which will fall and turn into green slime.

The many animals had their efforts in getting the fruit and have problems. It all started when Ronald tried to bash the tree, but nothing happened. The animals worked together to reach the fruit, but Audrey can't catch it. The animals began to collapse.

The animals did the same thing again, but a beetle began to bother Nelson. This caused him to sneeze and the animals began to collapse again. Toby reached the top of Audrey and the fruit is falling. Toby was able to catch fruit and the animals shared it together.

Lucy wished there was a fruit like the one in the story in her garden. It is too late to wait for the fruit to appear. Lucy goes back to bed after that. 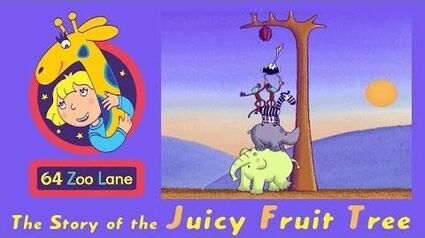