64 Zoo Lane Wiki
Register
Don't have an account?
Sign In
Advertisement
in: Episodes, Season 1 Episodes, Episodes that Georgina told the story,
and 6 more

The Story of the Jungle Clearing

Lots of garbage and broken vines have been scattered all across the African jungle. The animals need to clean up the mess.

Lucy slips over a banana peel and is saved by Boris. Georgina is advising her to keep a lookout for garbage.

The animals wanted to play fun, but there is a mess all across the jungle. Some of the animals keep on slipping, due to lots of banana peels scattered across the African jungle. The cause of the mess was the 2 monkeys, who were being the culprits.

The playground was actually made out of garbage. Lucy would like to visit this place sometime. 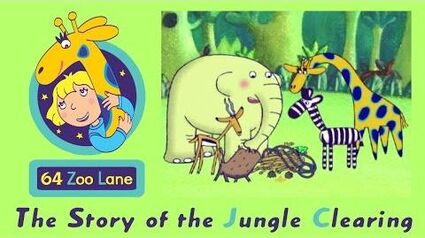