The Story of the Jungle Pie

Kevin is a very fussy eater, because he's not interested into trying new foods. Georgina is making him a pie when refusing to eat new food and see what's missing.

One afternoon, Toby, Kevin, and Doris were having a picnic in the jungle. They were eating burgers and chips. Kevin explained that he wouldn't eat anything else besides burgers and chips. Georgina has a basket of fruits for dessert. Toby and Doris like to eat fruit for dessert. Kevin doesn't want any fruit, since he's a carnivore. Georgina gets very disappointed with Kevin for eating the food in which Toby and Doris were eating.

Georgina wished if Kevin could try different foods. She got help from other animals in the water hole. Nelson began asking Nathalie for a brilliant idea for Kevin to try different foods. Back in the marsh, Toby, Kevin, and Doris were playing a game. Nathalie arrived at the marsh. She said that a pie is being made in process. Everyone, except Kevin, wanted to join in. The only way Kevin can eat burgers is to help the animals.

Kevin made a deal with Georgina. He meets Nelson watering vegetables in Georgina's garden. Kevin tripped over a rock while trying to water the vegetables. Nelson teaches Kevin how to pull the carrots. Kevin has to pull the carrots very slowly to avoid breaking them into pieces. Kevin pulled one carrot without cracking it. The second one has cracked as Kevin was trying to pull it. Kevin ate half of the carrot. Kevin also must help Herbert as well as Nelson.

Kevin didn't know that carrots tasted sweet. Kevin is taught how to catch worms in order to make the pie. Kevin started blowing air for the worms to come out. He caught two more and one worm fell into his mouth. Kevin thought to himself that worms taste like potato chips. The next task is to collect berries from the tree. No one must eat any of the berries while collecting them. Kevin also tasted a berry, which tasted sweet. The animals have decided to taste one instead.

The animals have all the ingredients for the pie. Kevin started stirring the pot and decided to have a taste. The pie is now being baked in an oven. Georgina remembered her promise to Kevin. The animals waited longer until the pie is just right. Nelson began flipping the pot in order to make a perfect ingredient. The pie is made perfectly and is steaming hot.

Meanwhile, Georgina had something special for Kevin. He is given a burger for helping all the animals. Kevin didn't feel like eating a burger. He is given a piece of pie to Kevin. Kevin decided to eat some part of the pie. Kevin liked trying new foods.

We learn that we should always try new food when we go to other places. Only a few cabbages were left. Lucy decided to taste the last one. Lucy liked eating cabbages, in which she didn't want to try one at first. 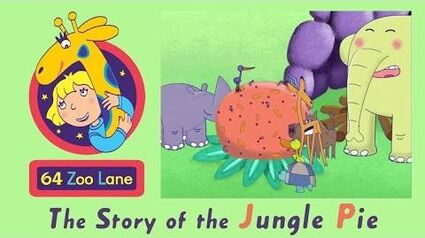