The Story of the Monster in the Forest

Jazz, Leopoldo and Taco try to scare Adam while trying to find Annie in the forest. However, all their tricks backfire on them when Adam is never scared.

In the deep dark forest, the animals make a plan to scare Adam. Jazz told Leopoldo and Taco to do the plan in the forest immediately. Taco began dropping some nuts on Adam to scare him. Adam was not scared of the trap. Taco gets angered when the trap didn't scare Adam.

Leopoldo created a trail of monstrous footprints in order to scare Adam. However, Adam looks at the big footprints to see who created those. This trap didn't scare Adam either. Leopoldo began falling on his back after Adam talked to him about those big stilts.

Meanwhile, Leopoldo talked to Jazz and Taco about Adam who faced his fears in the forest. Later on, Jazz, Leopoldo, and Taco set up a trap to scare Adam. The trap consists of a boulder, a fake monster, a pile of leaves on mud, and a tree of falling fruit. The trap went soon before Adam could appear. The boulder started rolling down the hill, chasing the animals. Jazz crashed into the cactus, Leopoldo gets knocked into the mud, and Taco crashed into the tree.

Jazz, Leopoldo, and Taco were injured after avoiding the boulder. The animals were never scared of the trap after listening to Adam. Adam decides to meet his friend Annie in the forest. He asks the other animals to stay here while he finds Annie. The animals decide to scare Annie instead of Adam. Suddenly, a voice is heard behind the animals after mentioning her name. Behind them was an anaconda, which is the monster in the forest. They are later scared by the anaconda, fleeing the forest in terror. Adam and Annie were the best animal friends in the forest.

Lucy has learned that things that are first encountered can never be frightening while meeting them the next time. Lucy decides to go back to bed, because she thinks there may be a monster under her bed.

Did someone mention me? 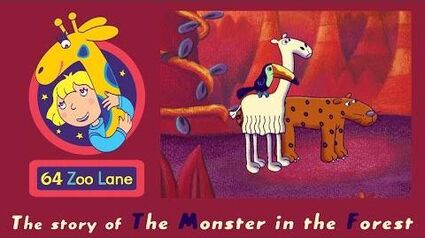