The Story of the Play and Splash Pool

When Joey finds a pool, the animals decide to have fun in it. However, the pool was completely ruined with too many animals in it.

Lucy has the materials for totem tennis. The monkeys began playing this game until Nelson got tangled up by messing it up. This upsets Lucy, because the two are playing this game badly. Wally hears Lucy's thoughts about the wrong way. He tells her a story while the monkeys are trying to free Nelson.

One hot day, the animals are upset with the heat. Joey was not bored with the heat. All he found was dust and stones in the desert, alongside a swimming pool. Joey started splashing in the pool. He also made a slide for him to enter the pool. Joey is suggested to try the leaves (as a diving board) rather than use the slide.

A few seconds later, Jimmy is impressed with Joey in this enrichment. Phoebe, Mr. Platypus, two parrots, and the triplets began to have fun splashing. However, something was not right. the slide was broken into pieces. That is the case when the pool is overlapped by lots of animals.

The pool was completely ruined, due to lots of animals. Joey was very sad about it, leaving his favourite activity. The animals are trying to apologise to Joey, but Joey isn't with them. This made the animals think of building a new pool. The animals did suggestions to bring water, but the pool is not full.

Wally began summoning the rain in order to help Joey and his friends. The cloud brings rain across the his home. Wally then brings the water to the pool. Joey is very happy when the pool was remodeled. The animals began playing in the pool until sunset.

The monkeys have untangled Nelson after the story ends. They began to play one last game until Nelson freed himself. Lucy decided who is next, but it is late. It is time for Lucy to go to bed. 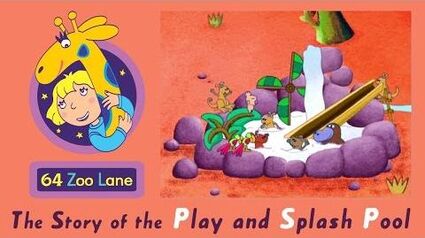