The Story of the Puffins' Treasure

Thomas, Sharon, Lewis, and Jamie are realizing why their football has vanished. However, the football did not vanish; the tide carries things from one place to another.

Lucy has a seashell from the seashore. None of the animals (except Gunnar) know a story about the biome.

One morning, the puffins are playing football. Suddenly, the ball is bounced right into the ocean and the four are trying to get it back. Thomas tries to find the ball, but nothing happened. Soon, he is approached by Mister Mustache for being too young to retrieve the ball.

The four are very impatient when trying to wait for their football to arrive back on the island. Mister Mustache began to return to the cave in order to write a letter for Aunt Louise. The next day, Thomas, Sharon, Lewis, and Jamie are awake in the early morning. None of them could find the football - just a seashell necklace for Sharon.

Later, the four began building a see-saw. The puffins have an idea after two failed attempts. They ask Gunnar to find the ball, in which he agrees to do so. Gunnar began to fly around the island, but there is no sign of the ball on the water.

Thomas, Sharon, Lewis, and Jamie had a very hard time finding the treasure. Thomas began convincing the other three to ask Mister Mustache. The three of them are afraid to talk to the walrus, due to his grumpy attitude. Thomas has four pieces of seaweed to in playing a game. Jamie began to ring the bells outside the cave. He began encountering Mister Mustache continuing to write his letter. Jamie began asking him about the treasure on the island.

The animals began to stay on the island to wait for the treasure to arrive. Thomas, Sharon, Lewis, and Jamie began singing a song for the treasure to come back. The animals began to feel sleepy while trying to sing more for the tide to come. Suddenly, the tide is rising with the football back to the island. The puffins are very happy with the treasure back on the island. The four were told that the objects would come back with patience. Mister Mustache began to give the ball back to Thomas, Sharon, Lewis, and Jamie.

The monkeys would like to go exploring across the beach to find treasure. The animals are very lucky, because many of them have lots of stories to tell. 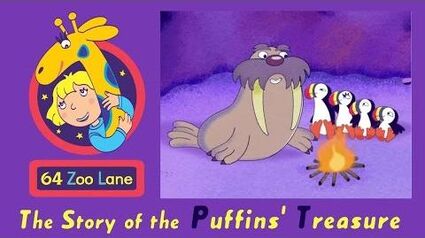