The Story of the Puffins of Mossy Bay

The 4 puffins in one island are playing football illegally by striking their ball on Hercule. They try to prove him wrong about the prohibition of football.

Everyone says "Hello" to Lucy, except for Nelson. Nelson is in a grumpy mood, since this is the reason why Nelson won't say "Hello". The monkeys began saying that Lucy "doesn't like football". Lucy still likes football, which might be a mistake. Lucy began asking Nelson to tell him a story. Nelson agrees with her. This reminds him of a story that takes place in Mossy Bay.

Somewhere in the Atlantic Ocean, there lives an island full of marine life. Everything is quiet in the island, even Hercule Mustache began to enjoy his peaceful day. Everything is quiet until the moment is interrupted by noises near his resting spot. The 4 puffins are playing football illegally. Hercule began asking the football team that the football can't be used on the island. This is the case where there is a sign that prohibits the use of the balls. But the team didn't listen and played football continuously. Hercule gets hit by the ball, which makes him enraged. Sharon walked towards Hercule to get their ball back. Hercule began asking Sharon that she and the other players are disturbing the neighborhood around the island. He later keeps the ball in his cave temporarily.

Thomas, Sharon, Lewis and Jamie felt very miserable after their ball was taken away. Jamie saw Thelma bouncing her ball (in the shape of a seashell). The puffins began asking her to borrow it. Thelma agreed with them so that all the soccer players can borrow her toy. The football players began playing again until the ball is near the cave.

Jamie must go into the cave in order to retrieve the ball; the others cannot go there or the 3 will be in trouble. Jamie retrieved the ball, but behind him is Hercule. Hercule began saying the ball doesn't belong to Jamie and the game is temporarily forbidden. Jamie was in real trouble after being warned. He followed Hercule to his cave. Inside, Jamie saw the prizes that were won with very little success. Hercule told his story about why he became the goalkeeper and Jamie never scored a goal. But as of now, Hercule is retired and can't be the goalkeeper. Jamie asked Hercule to be his trainer to his team. Hercule agreed to do so. Later, the puffins are training very hard. All the training was a success to prove him wrong and to return their favor.

The next day, the football players are at the football field for their first game. Here, the football field is inhabited by crabs led by Jack with a big claw. Hercule began asking that the team will be defeated by the crabs. The crabs started playing football since the team wouldn't win. The puffins decide to win the match in order to prove their coach wrong. Gunnar began blowing the whistle for the match to begin. Thomas, Sharon, Lewis and Jamie began competing against the crabs in football. During the game, only a few seconds are left before the game is over and the crabs are about to win. Jamie kicked the ball right towards the goal and Jack is unable to deflect it. As soon as Jamie scored a goal, the crabs are defeated. As Jack and his crabs lost, this resulted a victory for Jamie. The puffins have won the game.

Hercule is very proud that Jamie scored his first goal. Jamie is celebrated for scoring a goal for the first time. Jamie began asking Hercule for a celebration for their win, but their first win doesn't count. Soon, the puffins are training hard for their future.

Lucy would like to meet Hercule Mustache in sometime. However, it is time for bed.

"Mrs. Thelma Whale, can we borrow your ball, please?" 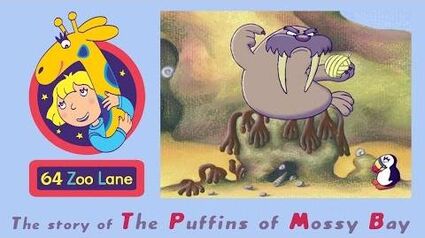