The Story of the Record-Breaking Puffins

The puffins must make high scores in playing games, but their noise is disturbing Hercule trying to build a sculpture. The puffins try their best not to disturb him.

Lucy slid down Georgina with her stopwatch and broke a record for the quickest time. The animals thought Lucy was in a hurry for arriving tonight. The monkeys are trying to make a new record for swinging in the tree, but Gunnar appeared next to them. This reminds him a story about Thomas, Sharon, Lewis, and Jamie trying to break a record.

One morning, the puffins are ready to play football. Lewis has slid down in 7.2 seconds before arriving towards Thomas, Sharon, and Jamie. Lewis is suggested to play another game other than football. The puffins are making a long length of seaweed in the next game. Meanwhile, Hercule was building a sculpture in the beach. Thomas, Sharon, Lewis, and Jamie had made fifty lengths of seaweed, but Hercule is distracted by the noise far away. Hercule is upset with them for making noises far away from him.

Meanwhile, Thomas, Sharon, Lewis, and Jamie were trying to beat a high score in the icebergs. The puffins are standing on their heads on the ice, but the ice is cracking. Hercule is worried that the ice has cracked. Thelma saved them from the cracking ice. Hercule is very upset that too much noise is ruining his sculpture. The puffins must play far away in order to make a high score.

The puffins moved to the other side of the island. They started digging the longest tunnel in good processing. Meanwhile, Hercule returned to his sculpture. Suddenly, the ground starts to shake before Hercule can finish his art. The puffins have reached the area with the sculpture. The sculpture is broken as the four were trying to make a high score. Hercule is very upset with the puffins for breaking his sculpture.

Everyone thought of a new game that doesn't bother Hercule. This game is about someone carrying the most objects at once. Gunnar began carrying all four puffins in this game. Thomas, Sharon, Lewis, and Jamie finally broke a record. Gunnar is suggested to take a quick tour across the island. Gunnar agreed with the suggestion. Gunnar took the animals on a tour across the island. Hercule rebuilt his sculpture one last time. Lewis started falling down from the sky after a sneeze. Hercule saved him with a trampoline and Lewis landed on the sculpture.

Everyone liked the sculpture with Lewis on it. Hercule had never broke a record before. Hercule is very happy with the puffins for helping him.

Lucy liked the part where Hercule broke a record in the end of the story. Lucy goes back to sleep in a few seconds. 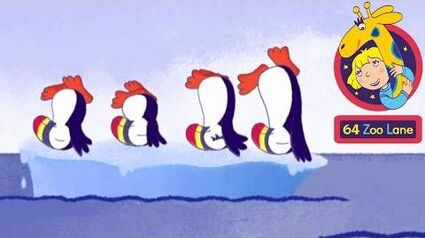