The Story of the Savannah Craze

Doris is very tired of playing hopscotch, which makes her want to invent a new game. She decides to let everyone try the bouncing balls, which everyone was not impressed.

Lucy has a hula hoop, which the animals don't know yet. She explained that she and the other students are doing the hula hoop at school. The animals think this game is a craze.

One morning, the trio began playing hopscotch in the marsh. Doris began suggesting for a change after playing hopscotch many times. Doris is bored with the game that has been played twenty-seven times all day long. Doris decided to look for someone else who plays other games besides hopscotch.

Doris gets hit by a funny fruit on the head. It is revealed that the fruit is actually a bouncing ball. She began asking Alan to play this game. However, the ants started scurrying away while trying to play the new game. She later goes to the same place she's been before. She suggested the other animals to play this game. This suggestion distracted the animals, which prompted Doris to play somewhere else. She returned to the flamingos later on. She threw the ball towards them, but the ball had made their feathers wet. Isabel began throwing the ball back to Doris to play the game somewhere else.

She threw the ball towards the starting place, which Toby and Kevin weren't impressed. She returned to the savanna again. She sees the monkeys playing hopscotch. Doris entered a small cave, which made funny sounds when throwing the ball on the walls. The monkeys began entering the cave, which began making sounds in the tunnel. The animals are attracted to the sound in the cave. They started throwing the balls on the wall, which made music in the cave. As the sun went down, the animals are very tired. Doris combined two games in one at night.

Lucy feels very happy with the story. Lucy has something special for tomorrow: she's going to teach everyone how to play hopscotch. Lucy can leave the hula hoop for everyone to practise while going to bed. 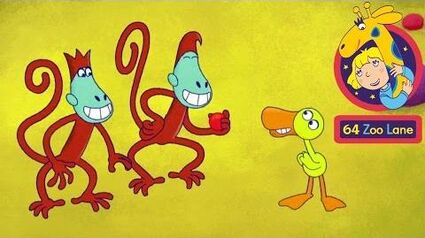