The Story of the Whale Trip

The puffins are excited on a trip across the ocean. But the problem is that not all of them listen to Hercule Mustache. One of them is left behind during the trip.

Lucy is going on a field trip tomorrow, but has rules which she and the students must follow. The rules say that students must walk in pairs, hold hands, not forget belongings, and listen to the teacher at all times. Lucy isn't interested with these rules. This reminds Gunnar a story about a trip across the ocean.

It is a beautiful morning on Mossy Bay. Hercule and Thelma were waiting for passengers on the island. The puffins have arrived for the trip. They are given rules about the trip before getting into trouble. The animals start boarding on Thelma across the Atlantic Ocean. They see the waves on the journey. Their first destination is an island filled with mussels. Sharon touched a mussel, but some of them started singing. More mussels started singing a sea shanty after touching one of them. The puffins are attracted to the tune. Hercule is shocked that no one must shave his moustache, based on the song.

After visiting the island of mussels, the animals decide to dive underwater. There, the animals find crabs and seahorses in the water. Thomas, Sharon, Lewis, and Jamie began eating fish for lunch. The animals go on a next stop: a pool of icebergs. Hercule tried to explain the rules, but the puffins don't listen to him. They ended up having fun in the ice until it is time to go. Hercule didn't know that Lewis is left behind.

Thelma tries to bring everyone back home, but Lewis is left behind. Thelma has to return to the same spot to return to Lewis. Lewis was making a sculpture for Hercule Mustache. He went back on Thelma to return home. The animals had fun on a trip across the ocean.

We learn that rules are important so no one gets lost. Lucy talks about a field trip for tomorrow: she's going to the zoo on a field trip tomorrow! Lucy has to follow the rules when on the field trip. 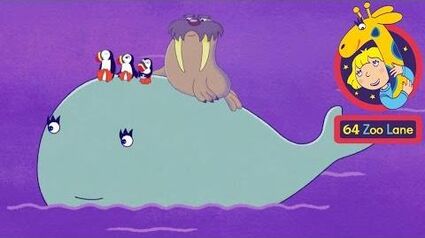